CV FRAUD – MORE THAN A GRAIN OF TRUTH 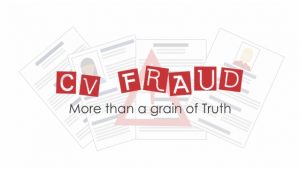 In times like this, people are very desperate for jobs, and as such, falsification of information is on the increase. An even larger portion of resumes is misleading. People embellish job responsibilities or change actual job titles. Fake degrees are on the rise, even bogus job references are prevalent in today’s job market. Dates are blurred so the employment record is difficult to follow and confirm.

Where does this leave the average employer in their quest to check the candidate’s background?

Background checking has become critical. Check every fact including degrees and the dates they are gotten, degree majors, employment history, exact dates of employment, direct supervisors’ names, job titles, job functions, salary history and reason the candidate left each job. If anything seems suspicious, ask the candidate for details and verify the stories the candidate tells you. Ask the candidate for verification.

WHAT PEOPLE LIE ABOUT:

It’s one thing to update your cover letter to present you as the best candidate for the job, it’s an entirely different matter if you change your job title. Sometimes, these can be embellished, such as making an assistant project lead into a project lead. Sometimes, they can be downright untruth. For example, pretending to be the CEO of a company that they never worked at.

This is perhaps the most common lie told on CVs. People claim to have a degree when they don’t. Inflating their marks, thinking that once they are in the door, then their natural gifts will show. Often, the higher the pay and status of the position, the more likely candidates are to add “a little bit of fluff” to their CV. But where is the line exactly? It seems as though it’s unclear; even some of our officials have been found guilty of fraudulent qualifications!

Lying about salaries appears on both sides of the scale. Some candidates would boost their salary in order to request a higher salary at the new company, but there are also instances where candidates would decrease their salary since they’ve previously been turned down for a position on account of being “too expensive”.

Candidates could lie about the duration of unemployment, whether they were unemployed, and also the reason behind their unemployment. People also pretend they left voluntarily, when in fact they were sacked.

People coerce their friends and family into pretending that they are a former employer thereby providing a reference for them.

Being able to put someone with a doctorate up as a reference surely does look better than listing your primary school teacher. Candidates sometimes lie about their references and how they know them – or whether they exist at all!

Ex-offenders often have trouble landing jobs. Whether this is fair or not is an entirely different debate. But because of this, candidates with criminal records would often try to hide their criminal past.

There’s an often-repeated assumption that a short duration in a job is a bad thing. Consequently, people pretend that they’ve done something for longer than they actually have. Sometimes this is to give them more experience than they really have.

Driven by circumstances beyond our control, candidates easily take to age falsification without weighing the legal and social implications of their actions. One major reason for this act is the age limit placed on employment. Would you be willing to hire someone who is five years away from retiring?

In all, we need to know that employment application fraud is rising. Employers need to screen employment applications to discern lies, exaggerations, and extensions of experience, falsifications of educational credentials. The time you spend upfront checking these details will save you the time and energy you’ll spend later addressing unqualified employees.